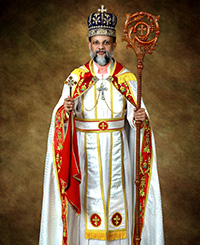 H.L. Mar Awgin Kuriakose Episcopa
Mar Awgin Kuriakose was born on May 21,1974 at Vellanikodu, Marottichal, Thrissur. He is the second of the four children of Pachamparambil Poulose and his wife Achamma,belonging to Mar Mathai Sleeha Church Parish, Marottichal. He showed a keen interest in the church activities from his childhood onwards. He completed his High School in 1989 and joined the seminary and stayed there for 6 years (1989 - 1995). During his stay at the seminary he earned his Bachelor’s Degree in Economics (B.A) from the Calicut University. Afterwards he joined the Jacobite Syrian Seminary at Mulamthuruthy to pursue theological studies. On 21st of April, 1996 he was ordained as Deacon.

In 1996 he joined the Gurukul Lutharan Theological Seminary in Chennai. Late H.L. Dr. Poulose Mar Poulose Episcopa took the initiative for his admission there. He earned B.D. degree from the University of Serampur, Kolkotha , India in the year 2000. During that period (1996 - 2000) he was the assistant vicar of Mar Qardhakh Sahdha Church, Chennai. On 13th of June, 2000 he was ordained as Priest by H. G. Dr. Mar Aprem Metropolitan. He was then posted as the vicar of St. Thomas Church, Ernakulam.

In the year 2001 he was appointed as vicar of Mar Timotheus Church, Bangaluru and joined the Dharmaram Vidhyakshethra, Bangaluru, India for Post Graduate studies . He earned his Master’s Degree in Biblical Theology (M. Th) and was enrolled for PhD in the year 2004 but continued PhD at the Oakland University in New Zealand..

On 17th of January 2010, he was consecrated as Episcopa of the Holy Catholic Assyrian Church of the East for the Archdiocese of India by H.H Maran Mar Dinkha IV.

From September, 2021 he is appointed as the Patriarchal Administrator of the Archdiocese of India and UAE by H.H.Maran Mar Awa III.